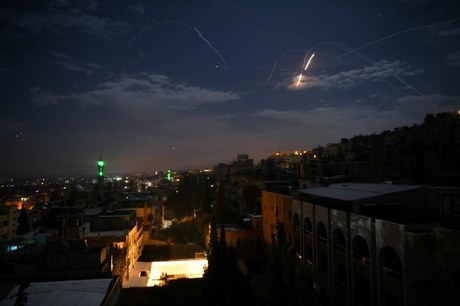 Syrian air defence shot down Israeli missiles targeting the south of the country Wednesday, state media said, as a monitor reported positions of the regime's Lebanese ally Hezbollah had been hit.

The Syrian Observatory for Human Rights, a Britain-based war monitor, said the strikes had targeted positions of the Hezbollah Shiite movement in two locations, but without causing any casualties.

"All the positions hit had the Lebanese Hezbollah there," Observatory head Rami Abdel Rahman said.

The missiles targeted Tall al-Hara, a hill in the southern province of Daraa where Hezbollah has radars and the regime has air defence batteries, said the Observatory, which relies on sources inside Syria for its information.

Israel has carried out hundreds of air strikes in Syria since the beginning of the conflict in 2011, targeting forces loyal to President Bashar al-Assad and the regime's allies Iran and Hezbollah.

Earlier this month, Israel struck multiple positions held by regime forces over a period of 24 hours, killing 15 combatants according to the Observatory.

In January, it targeted Iranian positions in Syria in what it said was a response to an Iranian missile strike from inside the country.

Israel says it is determined to prevent its arch foe Iran from entrenching itself militarily in Syria, where Tehran backs Assad in the country's eight-year war, which has left more than 370,000 people dead and displaced millions.

The bearded goat will go hoarse about this on Friday telling us all that if Israel does this just one more time he will destroy Benghazi or something.... Meanwhile the deaths of innocent Syrians are not his problem.