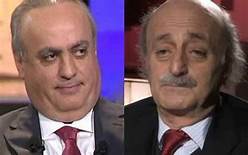 “I wish the Defense Ministry would reduce the number of firearms licenses granted to bodyguards and bullies and I wish the Interior Ministry would revoke the biggest number of permits for tinted-window vehicles in addition to hiking the tax on weapons,” Jumblat tweeted.

He also hoped “the culture of respecting people” will spread among “the bodyguards and their masters.”

Wahhab was quick to hit back, tweeting that “the problem is not in the presence of bodyguards.”

“The problem is in the bandits who attack people’s dignities and appear on the streets with their weapons upon the eruption of any minor incident,” he tweeted, alluding to PSP supporters involved in Saturday’s clash.

“We would punish anyone who would ‘throw a rose’ at Taymour (Jumblat), but we only want your men to respect the other opinion and here lies the problem,” Wahhab added, addressing Jumblat.

The Dmit standoff erupted as Wahhab’s motorcade, carrying one of his sons, was passing through the town.

An altercation between one of the bodyguards in the convoy and a town resident escalated into gunfire after which supporters of the PSP encircled the motorcade.

The convoy was later evacuated with the help of the army.