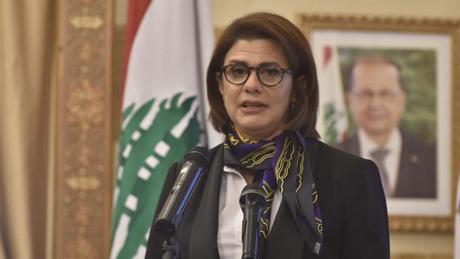 Interior Minister Raya al-Hassan on Sunday stressed that “the Cabinet is the right place and competent authority to deal with the Syrian refugee crisis,” in an apparent response to Foreign Minister Jebran Bassil’s remarks at Saturday’s municipal conference.

In a statement released by her press office, Hassan said the Cabinet can “devise an integrated strategy that takes into consideration the decisions already taken by the Higher Defense Council, especially in terms of specifying the municipalities’ role in addressing this crisis.”

The statement also noted that there is “national consensus” on “the need to shut down illegal shops and showing no leniency towards Syrians practicing any profession on Lebanese soil before obtaining the necessary permits.”

“But it is unacceptable to deal with this issue with a partisan and populist agenda and for partisan and personal objectives,” al-Hassan added.

She also stressed that the Interior Ministry is the ministry in charge of regulating the work of municipalities and preserving public order.

Bassil had announced during a municipal conference on Saturday that municipalities “have jurisdiction to bar the work of Syrians in sectors other than agriculture, cleaning and construction,” urging them to also prohibit “residential overcrowding.”

The cabinet and not the press is the right place to discuss every matter that affects the country.

They’re all a bunch of unprofessional politicians. Zero complexe whatsoever when the time is ripe to show their incompetence.

Oh let them discuss it after all thats all they can do lol. These refugees are not looking to Bashar to take them back soon so expect that president 3oun is in motion of naturalizing them soon.