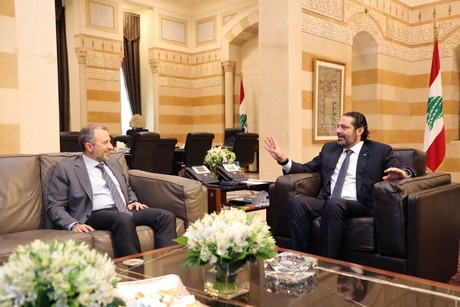 Free Patriotic Movement chief and Foreign Minister Jebran Bassil met Monday at the Grand Serail with Prime Minister Saad Hariri following tensions between them and between their two parties.

A statement issued by Hariri's office said the lengthy meeting was dedicated to “evaluating the previous stage, in light of the exchanges and stances that affected political stability.”

“The meeting was an occasion for a frank and responsible dialogue that tackled the various aspects of the relation and the points of disagreement,” the statement said.

“It was an opportunity to stress that the national interest should come before any other considerations,” the statement added.

Hariri and Bassil also agreed to “activate governmental work, create the appropriate atmosphere to finalize the state budget and pave the way for implementing the government's investment program and economic plan.”

The two men also tackled the issues of “waste management, refugees, the internally displaced, administrative appointments and the fight against corruption.”

Hariri and Bassil finally concluded that the political settlement that resulted in the election of President Michel Aoun and the appointment of Hariri as premier “will continue to be strong and effective.”

Bassil had told reporters ahead of the talks that “the meeting with PM Hariri is normal and regular and someone tried to stir a problem without succeeding,”

“The meeting is prearranged,” he added.

Sources informed about the meeting told the FPM-affiliated OTV that the talks were "normal and excellent."

This is like a prearranged marriage, they are rarely happy ones lol

Never has Lebanon seen a prearranged meeting between two deranged leaders like this one, ever!

I have a pre-arranged meeting with both of these gentlemen and there is a lot on the agenda including their souls.

Innocent question for you skeleton: Do you use coal or gas for the chauffage?

Just look at them both and it begs the question of where else can two dweebs who lack luster and ability ever reach this point of leadership? The dwarf on the right has one claim to fame of whom he sleeps with equates to his ability to lead. The guy on the right came to power as a result of whom his mother chose to sleep with. In reality they are both there as a result of fornication and not that of being effective themselves. Fornication is the story and future of Lebanon....they too will have offspring and yes they too will be in power one day as a result of it.