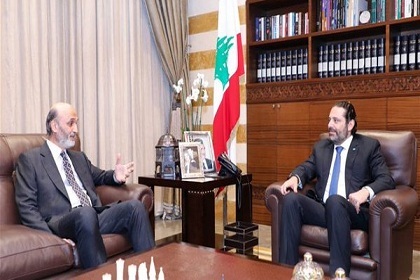 "We discussed the issue of the state budget and we are coordinating our stances with al-Mustaqbal Movement to the fullest extent," Geagea said after the meeting.

"A long relation binds us with Hariri and preserving national sovereignty is among our constant principles," he added.

Geagea had earlier in the day said that the government is “partially paralyzed because one of its main partners is acting arbitrarily, absurdly and without any limits,” in an apparent reference at Free Patriotic Movement chief and Foreign Minister Jebran Bassil.

“It is no longer possible to rescue the situation without direct intervention from General (Michel) Aoun,” Geagea added.

Referring to the recent tensions between Hariri and Bassil, the LF leader noted that the standoff was related to the administrative appointments.

“The political tension that we witnessed over the past weeks between two components of this political majority who are at the core of the settlement was not related to differences over creeds, principles or the way that should be endorsed to rescue Lebanon, but rather to appointments, because once again a party of the settlement parties is insisting to have all the Christian appointments, disregarding the presence of other parties,” Geagea explained.

“We are not raising this issue because the LF wants a share, seeing as we consider that we will get our share when the state approves a mechanism for appointments,” he added.

The two characters responsible for the miserable and chaotic state of affairs.

Yep they brought the 'strong' president and now may they suffer the consequences.