Japan Tanker Hit by Mine Resembling Iran's, Says US Army 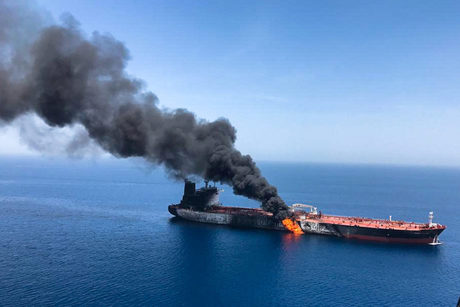 A Japanese tanker attacked in the Gulf of Oman last week was damaged by a limpet mine resembling Iranian mines, the US military in the Middle East said on Wednesday.

"The limpet mine that was used in the attack is distinguishable and it is also strikingly bearing a resemblance to Iranian mines that have already been publicly displayed in Iranian military parades," Commander Sean Kido of US Naval Forces Central Command said.

Kido told reporters in the UAE emirate of Fujairah that the US military has recovered biometric information of the assailants on the Japanese ship including "hand and finger prints."

Two oil tankers were damaged in twin attacks close to the Iranian coast on June 13, just outside the strategic Strait of Hormuz.

The evil Iranian regime sont care about sea pollution. They don’t care about fauna or flora. Such a regime only deserves one thing, which is to be ended.

ol @ blacacabla
The Joke of the Day
Like Every Day

So they also prepare your statements like they do Hassan Nasrallah's. No wonder yours like his are always laced with ignorant racist and sectarian diatribes. You must both have the same Iranian editor.