Hariri: Entire Lebanon against 'Deal of the Century' 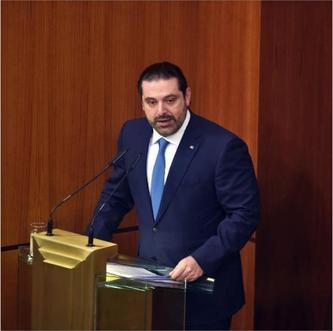 Prime Minister Saad Hariri on Wednesday stressed that “the government, the parliament and entire Lebanon” are against the so-called “deal of the century,” a phrase referring to the Trump administration’s proposed plans to resolve the Palestinian-Israeli conflict.

“The $90 billion debt should not be linked to the issue of naturalization, because everyone is to blame for it,” the premier added, stressing that efforts are underway to resolve the debt crisis and the economic problems.

On Sunday, Parliament Speaker Nabih Berri said “mistaken are those who think that waving billions of dollars might tempt Lebanon” to naturalize Palestinian refugees.

U.S. President Donald Trump’s son-in-law and adviser Jared Kushner has said that the U.S. Middle East peace plan that was presented Tuesday in Bahrain aims to raise more than $50 billion for the Palestinians and create one million jobs for them within a decade.

The 10-year plan calls for projects worth $27.5 billion in the West Bank and Gaza, and $9.1 billion, $7.4 billion and $6.3 billion for Palestinians in Egypt, Jordan and Lebanon, respectively.

Projects envisioned include those in the health care, education, power, water, high-tech, tourism, and agriculture sectors.

It calls for the creation of a "master fund" to administer the finances and implementation of the projects that is says are akin to the Marshall Plan that rebuilt Europe after World War II.

Lebanese politicians at their best! They know the Palestinians in Lebanon are never going back to Palestine unless the state of Israel no longer exists. The existence of the state of Israel is guaranteed by every super nuclear power. Hence, the demagogue politicians prefer the Palestinians to live in camps, poor, and deprived and treated like criminals rather than accept the aid coming to improve their living conditions.

I do not think anyone is opposed to financial aid for the improvement of Palestinian lives in Lebanon, Jordan, Syria and even refugees inside Israel the West Bank and Gaza. The plan however doesn't address the systemic oppression of Palestinians in Israel/Palestine,
doesn't put an end to occupation,
doesn't mention the illegal continued expansion of settlements inside the West Bank,
is okay with the annexation of the Golan heights,
talks of a defenseless Palestinian State and the list goes on. We all agree Israel is not going anywhere and is backed up by the US.
We ask for Equality; the rise of one state between the river and the sea with equal civil rights to all and freedom of movement.

So let's assume things stay as they are: which is better for the Palestinians

1) Receive $50 billion in aid and investment and live under oppression, illegal settlements, and a defenseless Palestinian state, etc.

2) Receive $0 in aid and investment and live under oppression, illegal settlements, and a defenseless Palestinian state, etc.

Ashtah, they want the Arabs to waste billions for nothing. How can you improve an economy when you are under siege with hundreds of check points? This is a joke.

I have the utmost respect and deepest admiration for mrs. @bigjohn for knowing that White Apartheid South Africa had nukes.

Final point, there are no South African natives for a very simple reason, they were completely wiped out by the colonial powers. the current black people such as the Zulus in South Africa come from the distant north Central African regions. In other words BJ, you know nothing about anything. Yalla, foot nem ya shatir.

Why do you reject a plan that doesn't concern You saad? You don't even know what the financial and political settlements are all about unless you have a spy in the oval office which i highly doubt. As Galaxy wrote, it's pure demagoguery... you're a lost cause. I'm not against the deal because we know nothing of it, only speculations!

This deal is disgusting. In the deal, Americans get arabs to pay for palestinian projects to shut them up while israel gives nothing up.

I dont like pals, and am sick and tired of them. But this deal is a real dishonour to all arabs.

Like if we needed an american jew, kushner,to tell saudis to invest in palestinian territories.

Given the other choices Leb 1st I would say the Palestinians have one chance in a billion to be able to move forward and live in civility. This is an opportunity for peace in the region however those who stick behind the Syria forum or underneath its auspices like our PM are prone to reject it. It is obvious to the world that Lebanon cannot make its own decisions and they come from Damascus and Iran and hence no deal. As far as your flaming heart for Arabism please pray tell what it has done for us in the past 50 years, yet in the same sentence you mention your dislike for the Palestinians?

Kushner is an American correct but would it matter less if he happened to be a Muslim but because of his birth he becomes a bad person. Please update us on the last Lebanese muslim leader who tried to even mention peace with Israel?

Wow prophetic words loooool Death is the only outcome? Let me guess tying your shoe laces is a conspiracy devised by Israel?
This is another reason why you will continue to be bought and sold at market and Israel will always be able to manipulate feeble minded people, you just make it easier.

Shia collaborators to Syria and Iran only have one outcome ... DEATH!

Who can disagree with this? Get the necklace BJ, I’ll let you grab the first one.

Ashtah, Freedom is not bought with money. No Palestinian in their right mind would accept to be paid to keep the status quo.

3) Receive aid to rebuild a devastated Palestinian community while tackling the above mentioned issues.