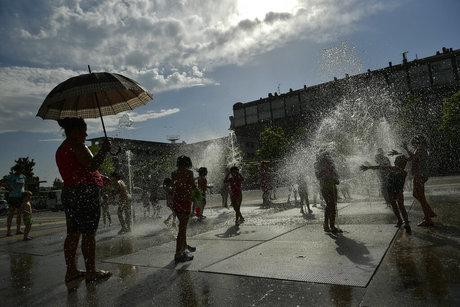 German police cautioned a man riding naked on a moped while topless sunbathers sparked a row in Munich, as temperatures were to soar to record highs in several European countries Wednesday.

Meteorologists blamed a blast of hot air from northern Africa for the heatwave early in the European summer, which could send thermometers above 40 degrees Celsius (104 Fahrenheit) in France, Spain and Greece on Thursday and Friday.

In Germany, where the 70-year-old record temperature for June of 38.5 degrees Celsius could be beaten on Wednesday, police in Brandenburg cautioned a naked man for driving his moped wearing only his helmet and sandals.

According to Brandenburg police, who described themselves as "speechless" over the incident, said on Twitter the man's response when stopped was: "Is it hot or what?"

However, there was no joking in Munich after burly security guards ordered a group of women who were sunbathing topless on the banks of the Isar to put their bikini tops back on.

But the move apparently backfired, according to the Munich daily Sueddeutsche Zeitung, which quoted another sunbather as saying that she and others took their bikini tops off "out of solidarity".

An urgent motion was introduced in a plenary meeting Wednesday, reading "the bathing costume statues of the state capital Munich will be amended to the effect that bathing costumes must completely cover" the breasts and genitals.

On the north coast, sweltering temperatures bent railway tracks out of shape on a popular tourist route near Rostock on the Baltic Sea and an official said a track-laying company were trying to fix the damage.

Authorities were taking no chances in France, where a heatwave in August 2003 was blamed for 15,000 deaths.

Some schools are expected to close Thursday and Friday, while several cities including Paris and Lyon have restricted traffic to limit a build-up of pollution.

The country's weather service, Meteo-France, says the intensity of the heat is unprecedented since 1947, when detailed surveys started.

In Spain, a TV weather presenter tweeted "el infierno (hell) is coming", with the centre and northeast put on alert for soaring temperatures.

The mercury could top 39 degrees Celsius in Zaragoza or Navarre -- a new record for June in those regions.

The worst is expected Friday, when 33 of the 50 Spanish provinces face extreme temperatures, which could reach 44 degrees Celsius in Girona.

In Austria's Innsbruck, the world-famous carriage horses were given time off as the city recorded 36.7 degrees Celsius late Tuesday, breaking the 2012 record for Tyrol state of 36.6 degrees.

In Poland, the interior ministry said 90 people have drowned this month while seeking to cool off in lakes or rivers.

Likewise in Lithuania, 27 people were reported to have drowned so far as temperatures in the Baltic state soared above 35 degrees.