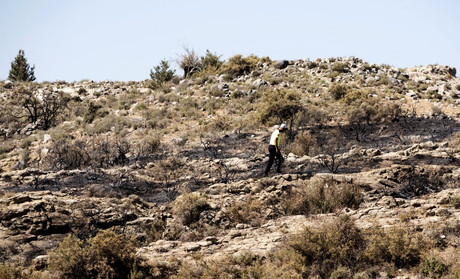 Officials in northern Cyprus said on Monday that a suspected Russian missile had exploded overnight on the divided island during an aerial raid in Syria.

"According to preliminary findings, a Russian-made missile -- part of an air defence system triggered during an air raid against Syria -- fell on our country yesterday evening," the territory's foreign minister, Kudret Ozersay, wrote on Twitter.

The markings on the debris were the same as those found on an S-200 missile that fell in Turkey last year, he added.

The object is thought to have exploded before hitting the ground.

The missile defence system may have been set off by Israeli air strikes that killed at least 15 people near Damascus and in Homs province late Sunday.

Russia supports the Syrian government in the eight-year war against rebel groups, and has provided extensive missile defence systems.

The leader of Turkish Republic of Northern Cyprus (TRNC), Mustafa Akinci, said: "This is one of the bad consequences of the war in the region."

The TRNC is not internationally recognised, having been formed after a Turkish invasion in 1974 in response to a coup sponsored by the Greek military junta.