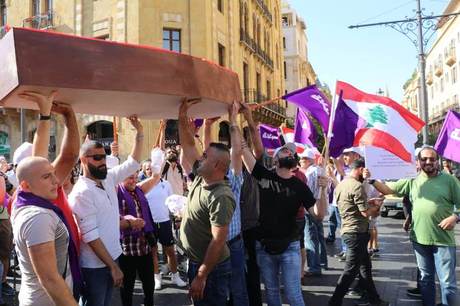 A protest was staged Thursday outside the headquarters of Beirut Municipality in the center of the capital ahead of a session for discussing and approving the terms of reference for setting up a controversial waste incinerator in the city.

The decision on the move was however postponed amid reservations voiced by council members belonging to the Lebanese Forces, the Free Patriotic Movement and other parties.

“The FPM and the LF have reservations over the terms of reference and we will take into consideration everyone's remarks regarding the incinerator on the condition that they are scientific,” Beirut Municipality chief Jamal Itani said after the meeting.

The secretary general of the Sabaa Party, Ghada Eid, meanwhile said that the decision was postponed after “the majority of the municipal council members rejected the incinerator.”

Eid took part in the sit-in alongside the MPs Paula Yacoubian, Nadim Gemayel and Elias Hankash and dozens of protesters from the Sabaa Party, the National Dialogue Party and civil society groups.

The National News Agency said the protest involved a minor scuffle between activists and security forces.

“They clash in politics but their deals remain on track,” Yacoubian said, referring to the government parties.

Gemayel meanwhile said his Kataeb Party rejects the presence of incinerators in any area of Beirut, warning that such a plan would harm all residents.

Eid meanwhile warned over the record cancer cases in Lebanon, challenging Itani to engage in a public debate with environmental experts.

you re more into beheading christians !!!

btw your dear joujou, Jouzou and Rifi are included

Landfills, incinerators and all requirements for refuse are rejected. So what is left shipping the waste to an more corrupt African nation that would accept them for a few dollars more? I do understand Lebanon is a tiny nation and lacks the land as well the social ability to handle waste. No one in Lebanon is willing to accept living next to a landfill and the recent bad management of these landfills have added more reason not to want to live close to one. So what is this government doing to plan long term?