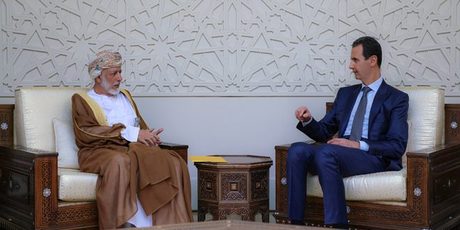 Oman's top diplomat met Sunday with Syrian President Bashar al-Assad in Damascus, Muscat said, in the Gulf official's second visit to the war-wracked country since conflict broke out in 2011.

It added that Abdullah also met with his Syrian counterpart, Walid Muallem.

Oman is one of the few Arab states to have maintained ties with Damascus over the past eight years.

Syria was suspended from the Arab League in 2011 for its deadly crackdown on an uprising against Assad's rule, and fellow Arab countries, including Gulf powerhouse Saudi Arabia, have supported the opposition.

Oman's Sultan Qaboos adheres to a strict policy of non-interference in regional affairs, maintaining relations with rivals Saudi Arabia and Iran -- a key backer of Assad.

Abdullah visited Damascus in 2015, Syria's official SANA news agency reported at the time, to discuss ways to "resolve the crisis in Syria".

Syria's once rocky ties with the region are on the rebound.

The United Arab Emirates reopened its embassy in Damascus late last year after years of closure, and Syria's relations with Bahrain and Jordan have also improved.

But Saudi Arabia remains hostile to Assad, who has made a military comeback with military support from Russia since 2015, clawing back almost two-thirds of the country.

Syria's multi-fronted war has killed more than 370,000 people and displaced millions since it began with the repression of anti-government protests in 2011.

Oman seems to appreciate butchers and genocidal leaders. Good to know... perhaps Muscat should get invaded to put an end to the sultanate.