Iran Denies Tanker Detained by UK was Headed to Syria 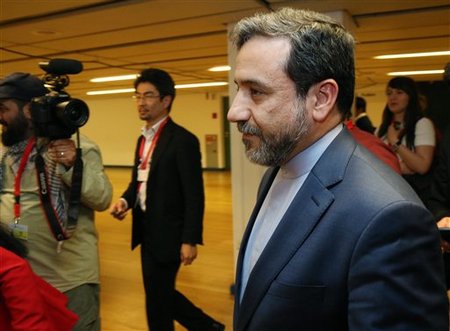 Iran denied Sunday that an oil tanker detained by Britain in Gibraltar was carrying crude to Syria, which would put it in violation of EU sanctions.

"The tanker was carrying Iran's oil... Contrary to what the British government claims, its destination was not Syria," said Iranian Deputy Foreign Minister Abbas Araghchi at a press conference in Tehran.

"The port named in Syria does not even have the capacity for such a supertanker to dock. Its destination was somewhere else," he added.

The 330-meter (1,000-feet) Grace 1, capable of carrying 2 million oil barrels, was halted in the early hours of Thursday by police and customs agencies in Gibraltar, a British overseas territory on Spain's southern tip at the western entrance to the Mediterranean.

The ship was detained 2.5 miles (four kilometers) south of Gibraltar in what it considers British waters, although Spain, which lays claim to the territory, says they are Spanish.

Araghchi said the tanker was crossing the Strait of Gibraltar because its "high capacity" meant "it was not possible for it to pass through the Suez Canal."

He insisted the tanker was intercepted in international waters and accused Britain's Royal Navy of committing "maritime piracy."

The tanker's detention came at a sensitive time in Iran-EU ties as the bloc mulls how to respond to Tehran breaching the uranium enrichment limit it agreed to in the troubled 2015 nuclear deal.

Iran is currently following "the legal path through court" but hopes the issue can be resolved by "ongoing diplomatic consultations," Araghchi added.

Iran Friday demanded that Britain immediately release the tanker, but Gibraltar's Supreme Court ruled that the vessel can be held for 14 more days.