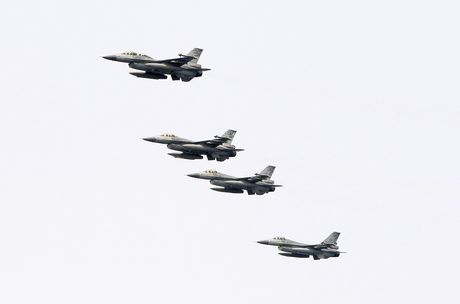 China urged Washington Tuesday to "immediately cancel" the potential sale of $2.2 billion in weapons to Taiwan, including battle tanks and anti-aircraft missiles.

The US State Department's decision to greenlight the first big-ticket US military sale to the self-ruled democratic island in decades comes amid already strained ties between Washington and Beijing.

"China urges the US to... immediately cancel the planned arms sale and stop military relations with Taipei to avoid damaging Sino-US relations and harming peace and stability in the Taiwan Strait," Geng said.

Taiwan has been ruled separately from China since the end of a civil war in 1949, but Beijing considers it a part of its territory to be retaken -- by force if necessary.

China has significantly stepped up diplomatic and military pressure on Taipei since the election in 2016 of President Tsai Ing-wen, whose Democratic Progressive Party refuses to acknowledge that the island is part of "One China".

It has also staged military exercises near the island, and steadily reduced the already small number of nations that recognise Taiwan.

The United States switched diplomatic recognition from Taiwan to China in 1979, but has remained an important ally -- and arms supplier -- to Taipei. Laws passed that year by Congress required Washington to provide the island with means of self-defence.

But it has been wary of big-ticket military equipment sales to Taiwan in recent years, fearful of stoking anger in Beijing.