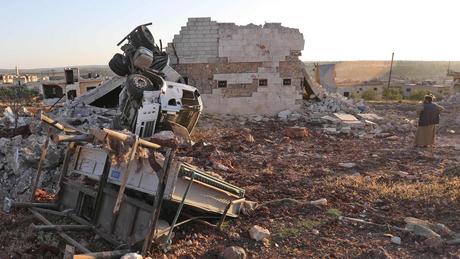 Regime air strikes on an opposition bastion in northwestern Syria Wednesday killed seven civilians including children and knocked a hospital out of service, a monitor and a doctor said.

The raids are the latest in an uptick in government and Russian bombardment since late April on the jihadist-administered region of Idlib despite a months-old truce deal.

Regime air strikes killed seven civilians including three children in the town of Jisr al-Shughur, said the Britain-based Syrian Observatory for Human Rights, which relies on a network of sources inside the country.

Three civilians died after the hospital was hit, while four were killed elsewhere in the town, said Observatory head Rami Abdel Rahman.

A doctor there said the health facility had been knocked out of service after the generators were hit, and the wounded had been transferred to another hospital for treatment.

"We have no more generators to operate the hospital. It's the only one for Jisr al-Shughur and neighbouring villages," Bassam al-Khattab told AFP.

Idlib, home to some three million people, has since January been administered by Syria's former Al-Qaeda affiliate Hayat Tahrir al-Sham.

But other jihadist and rebel groups are also present in the area.

More than 550 civilians have been killed in regime and Russian air strikes on northwest Syria since the end of April, the Observatory says.

The United Nations says 25 health facilities in the region have been hit, despite a September deal between Russia and rebel backer Turkey to avert a massive regime offensive there.

Syria's war has killed more than 370,000 people and displaced millions since it started in 2011 with a brutal crackdown on anti-government protests.

Bashar and his soldiers seem eager to enter jhannam