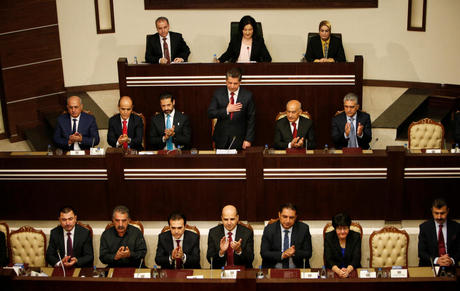 Barzani was appointed premier nearly a month ago by his cousin Nechirvan Barzani, who had served as prime minister for seven years before he was elected president in June.

Masrour Barzani is the son of veteran Kurdish leader Masoud Barzani, who remains a crucial powerbroker in the autonomous region.

On Wednesday, 88 of the regional government's 111-member body granted a vote of confidence to 21 new ministers.

Among them, the Barzani-led Kurdistan Democratic Party (KDP) was awarded nine ministerial posts.

In October 2017, the KDP spearheaded a controversial independence referendum that prompted Baghdad to reoccupy large swathes of Kurdish-held territory and led to Masoud's resignation as president.

Nearly a year later, the party emerged victorious in regional parliamentary elections and has since cemented its control of key government posts, including the presidency, premiership and cabinet chief.

Its main rival, the Patriotic Union of Kurdistan (PUK), was awarded six ministers. Qubad Talabani, the son of PUK founder Jalal Talabani, will retain his post as deputy premier.

Four of the new ministers hail from the Goran (Change) Movement and one from the Kurdistan Socialist Party.

Based on a sectarian quota system, one post was also awarded to the region's Christian minority.

But the ministry of natural resources -- of which oil is the most important and lucrative -- remains without an official head, making PM Barzani its de facto manager.

The regional government in Arbil is currently locked in a dispute over oil revenues with Iraq's federal authorities, which insist that the KRG must hand over revenues from the 250,000 bpd it exports through the north.

In exchange, the KRG would receive a portion of the federal budget and Baghdad would pay the salaries of its employees.

The parties regularly accuse each other of failing to fulfill their obligations.

Observers have pointed out that Nechirvan Barzani's ascent to the presidency could ease the ties between the two, but Masrour Barzani -- who embodies the KDP's more "nationalist" current -- would adopt a harder line and be less willing to negotiate.

On Wednesday, PM Barzani said a delegation from Arbil would travel to Baghdad soon to strengthen ties.

Ministers would then tackle the profound financial crisis ravaging the Kurdish region's economy in recent years.

"The government currently owes $14 billion in debts," he said.