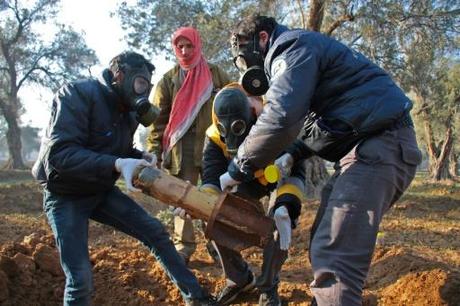 A new team set up by the global toxic arms watchdog to identify the culprits behind attacks in Syria has drawn up a list of its first investigations, the organisation's chief said.

Nine incidents are to be probed in the next three years, the head of the Organisation for the Prohibition of Chemical Weapons (OPCW), Fernando Arias, said in a report to member states.

He said the OPCW's Identification and Investigation Team given the task "is now fully operational".

"A preliminary list of incidents for investigation has been established, and contact with member states and with international, regional, and local actors is being sought," he said in his report to the member states, which are holding a four-day meeting that started Tuesday.

The states in 2018 agreed to give The Hague-based OPCW new powers to assign blame for attacks, despite opposition from Damascus and Moscow.

Syria has already refused a visa to the chief of the team while Moscow and Damascus have accused the OPCW of becoming "politicized."

The OPCW team aims to carry out three investigations in each of 2019, 2020 and 2021, according to the budget program that Arias presented separately to member states.

He did not give details of the first incidents to be probed.

But the West has called for the new team to quickly start work on identifying the culprits behind a deadly attack in the Syrian town of Douma in April 2018.

The OPCW said in a report on March 2 that chlorine was likely used in the Douma attack, which it said killed more than 40 people. The watchdog did not apportion blame as it was not in its mandate at the time.

The team can probe incidents going back to 2014. OPCW teams have identified 39 suspected chemical attacks in Syria since then. Blame for six of them was attributed by a joint OPCW-U.N. investigative mechanism, before Russia vetoed the renewal of its mandate in 2015.

The watchdog's member states meanwhile expressed concerns that Syria may still possess chemical weapons, despite agreeing to give them up in 2013.

Arias said in a report earlier this month that possible traces of a banned chemical were found at a facility in Syria.

He also said that remnants of destroyed toxic arms and production equipment at another location were missing.

Canada's OPCW ambassador Sabine Nolke said there was an "alarming likelihood that Syria continues to possess Schedule 1 chemicals" which include sarin and mustard gas.

Damascus agreed to hand over its chemical arsenal in 2013, narrowly avoiding U.S. and French air strikes in retaliation for a suspected sarin attack that killed 1,400 people in the Damascus suburb of Ghouta.

The OPCW won the Nobel Peace Prize that same year.