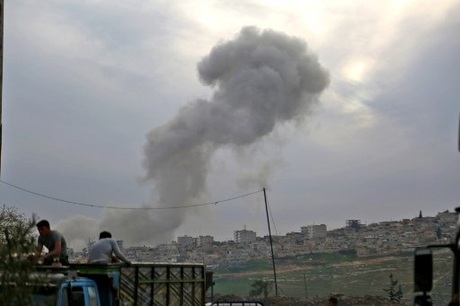 A car bomb near a checkpoint manned by Turkey-backed rebels in the northern Syrian city of Afrin killed 13 people including eight civilians Thursday, a war monitor said.

Turkish troops and their Syrian proxies took control of Afrin from Kurdish forces in March last year after a two-month air and ground offensive.

"The car bomb exploded near the checkpoint at the entrance to the town where vehicles were gathering to be checked," the Britain-based Syrian Observatory for Human Rights said.

Those killed also included four fighters and an unknown person, the Observatory said.

"Among the victims, at least six are originally from Eastern Ghouta", a former rebel stronghold outside Damascus retaken by the regime last year, Observatory chief Rami Abdel Rahman said.

There was no immediate claim for the blast, which is the latest deadly explosion to rock the city.

In January, a bomb placed on a bus killed three people.

In December, a car bomb took the lives of nine people.

The UN and Amnesty have also reported patterns of house appropriations by fighters and civilians bussed to Afrin during the surrender last year of Eastern Ghouta.

Half of the enclave's 320,000 residents fled, according to a report by the UN Commission of Inquiry, and most are unable to return.

Syria's war has killed more than 370,000 people and displaced millions since starting in 2011 with the brutal repression of anti-government protests.

Turkey accuses the YPG of being "terrorists", but the Kurdish militia also forms the backbone of a US-backed alliance fighting the Islamic State group in Syria.