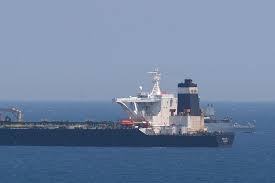 "This follows a protracted search of the vessel where documents and electronic devices have been seized and examined," police said in a statement.

Gibraltar police are interviewing both men, who have "been accorded their legal entitlements and access to consular representation," it added.

Gibraltar forces and British marines boarded the ship, Grace 1, and seized it on July 4 off the coast of Gibraltar, saying they believed it to be destined for Syria to deliver oil, which is subject to European sanctions.

Tests have shown the 330 meter (1,000 feet) tanker which is capable of carrying two million barrels of oil, was "carrying a full load of crude oil", the government of Gibraltar said Monday.

Iran has condemned the detention as an "illegal interception" and said the tanker was not headed to Syria.

The arrests come after London said earlier on Thursday that armed Iranian boats tried to "impede" a UK supertanker in the Gulf before being warned off by a British warship.

Iran's Revolutionary Guards denied involvement but also cautioned both the United States and Britain that they would "strongly regret" the UK Royal Marines' detention of the Grace 1.

Gibraltar police said the investigation was still on-going and the tanker remained detained.