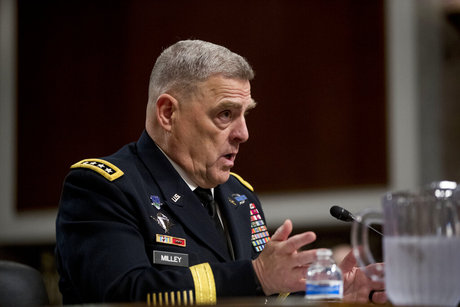 The United States and its allies are discussing plans to provide naval escorts for oil tankers through the Gulf, a top U.S. general said Thursday after Iranian military vessels menaced a British tanker.

General Mark Milley, nominated to become the chairman of the Joint Chiefs of Staff, told a Senate hearing that the U.S. has a "crucial role" in enforcing freedom of navigation in the Gulf.

He said the U.S. was attempting to put together a coalition "in terms of providing military escort, naval escort to commercial shipping," he said.

"I think that that will be developing over the next couple weeks."

Iran is starting to sweat the threat now! they can no longer bark and try to stab ships in the dark. Alienating their backward regime will play havoc on the country and hence why their demonic Mullahs are "sqauking".