Brazil's Bolsonaro Says May Appoint Son as US Ambassador 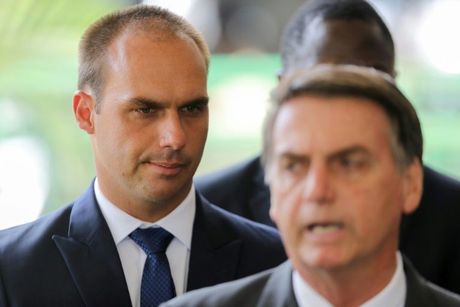 Jair Bolsonaro is considering appointing his son Eduardo as ambassador to Washington, the Brazilian leader has revealed, citing the 35-year-old's friendship with the children of US President Donald Trump.

Eduardo, currently a member of parliament, accompanied his father to a private meeting with Trump during a diplomatic visit to Washington in March.

"In my opinion, he can be the right person and could present the message perfectly in Washington," Brazil's right-wing leader told reporters in Brasilia on Thursday.

But the decision is up to Eduardo, he added, who would have to resign from Congress and secure approval by the Senate.

Eduardo, the third of the president's four sons, said he had yet to receive a formal offer but would accept the role.

"If the president entrusts me with this mission, I would be ready to resign my mandate," he said.

"I speak English, I speak Spanish, I was elected with a record number of votes, I am chairman of the Foreign Relations Committee... I believe these credentials give me a certain qualification."

The president announced he was considering his son for the role one day after Eduardo turned 35 -- the minimum legal age required for overseas ambassadorships in Brazil.