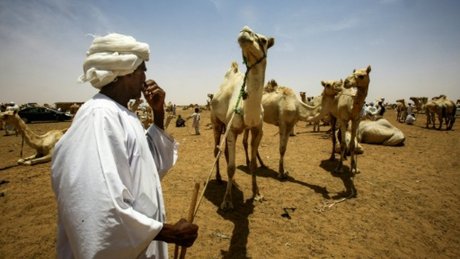 Not far from Sudan's capital Khartoum, the epicentre of an uprising that toppled autocratic ruler Omar al-Bashir, dozens of camel traders are oblivious to the country's biggest political upheaval in decades.

"What protests? We have all that we need in the desert -- water, food and livestock, we don't have any demands," said Ali Habiballah, 52, a camel trader in El Molih, a vast swathe of desert about 100 kilometres (60 miles) west of Khartoum.

Habiballah, with his deep, black eyes and leathery skin -- the product of working under a scorching sun for years -- buys and sells camels, just like his father and grandfather before him.

"I love the desert and drinking camel milk is enough to make me happy," Habiballah told AFP during a tour of El Molih's camel market.

"We don't care about politics. I don't even go to Khartoum," he said as his young son, dressed in traditional attire and seated in a leather saddle, rode by on a camel.

Sudan has been rocked by a political crisis since December 19, when protests erupted against the tripling of bread prices by the then government of Bashir.

The demonstrations swiftly escalated into a nationwide anti-Bashir campaign that finally led the army to oust him in April, ending his ironfisted rule of three decades.

Some camels are sent to slaughter houses for meat, but superior breeds are exported to Gulf countries to take part in races.

When it comes to politics, many traders in El Molih simply laugh.

"With or without Bashir, this country is just the same for us," said Ahmed Mohamed Ahmed, a camel seller, as he sat with other men in a mud house used for storing animal fodder.

"All we are interested in is whether the price of livestock goes up or down," he said, sipping hot tea.

In the distance, a mobile crane loaded a camel onto a truck heading to the border and onwards for sale in Egypt, Israel or the Gulf.

The price of each camel depends on what purpose the animal is sold for.

And a camel destined for racing in Gulf countries can bring in as much as 1.5 million Sudanese pounds.

Thousands of Sudanese nomads live in vast desert stretches of North Darfur, North Kordofan and along the border with Chad, Egypt and Libya.

Many hail from the Arab tribes who supported Bashir's brutal war against ethnic African rebels in Darfur that broke out in 2003.

While many traders profess to have no interest in politics, others have strong opinions.

"The Arabs would be happy if Bashir was still around," said Ali Salim Hamid, 35, who owns around 200 camels.

"I want Bashir, our father, to be back," added Hamid, who hails from North Kordofan, one of Bashir's erstwhile support bases.

For him, the paramilitary Rapid Support Forces (RSF) "had nothing to do" with a raid on a protest camp in Khartoum on June 3 that killed scores of demonstrators.

Protesters and rights groups have accused the RSF, which has its origins in the feared Arab Janjaweed militias that were unleashed in Darfur, of carrying out that raid.

But its commander General Mohamed Hamdan Dagalo -- widely known as Himeidti -- has defended his men, insisting there was an attempt to distort the paramilitaries' image.

"Previously, camel traders were targets of thieves in the desert but it was Himeidti who caught them and handed them to the authorities," said Hamid.

"Thanks to him our business continues."

Dagalo, who hails from Darfur, is the deputy chief of Sudan's ruling military council, which seized power after Bashir's downfall.

In an interview with AFP in 2016, Dagalo said that he used to sell camels and sheep in Sudan, Libya and Chad.

For people like Hamid it does not matter who forms the new administration in Sudan.

"Civilian or military government -- it is of little importance to us as long as it does not interfere in our business," he said.