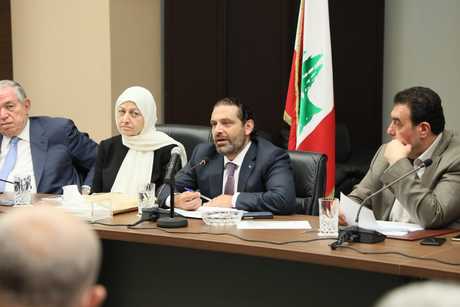 At the end of the meeting, the bloc issued the following statement that was read by MP Nazih Najem:

- The bloc discussed the agenda of the general parliamentary session dedicated to discussing the draft budget. It specified the required guidelines in this regard and stressed that the deficit rate reached by the government should not be exceeded for any reason. It also stressed the necessity of verifying the additional reduction reached by the Finance Committee and the ability of the competent authorities to abide by it.

- The bloc noted the limited progress made in addressing the consequences of the unfortunate incident that took place in Qabrshmoun and stressed the importance of continuing the efforts of General Director of General Security, General Abbas Ibrahim, and the decreasing tension between the parties of conflict.

- The bloc said the impact of this incident on the Cabinet’s work has become unacceptable and harms the general national order and the country’s need to face the economic and social challenges that lie ahead. This necessitates getting out of this incident and returning to the cabinet table as a framework for national consensus and for the irreplaceable dialogue among the political components.

- The bloc discussed the stances that violate the rules of disassociation. It found that these stances harm Lebanon's relations with some Arab countries and disrupt the efforts to improve these relations and correct the imbalance caused by irresponsible policies and suspicious campaigns.

- The Lebanese government has already defined in its foreign policy “the need to keep Lebanon away from external conflicts, and the commitment to respect the Charter of the Arab League, particularly Article 8, with the adoption of an independent foreign policy based on Lebanon's supreme interest and the respect of international law, to preserve the country as a place of peace, stability and convergence”. It goes without saying that Lebanon will not be part of any external or regional axis.

- The issues of Lebanon and its open conflict with the Zionist enemy on the issue of borders and demarcation are to be tackled in the Cabinet.

-The bloc commended the decision of Prime Minister Saad Hariri to stop the construction of kiosks at Beirut corniche - a popular seaside promenade in central Beirut- and to respond to the demand of the people of the capital to maintain the place as a touristic, sport and entertainment destination.

The bloc also praised the fact that the High Relief Committee, under the guidance of Prime Minister Hariri, hurried to help the people who were affected by the fire that broke out in a market over the Abu Ali River in Tripoli. It stressed the need for concerted efforts to find a quick solution to the problems caused by the fire and to compensate those affected and in most need of support and assistance.

The bloc noted the aggravation of the garbage crisis in some of the cities and villages in the north, and the warnings issued about the existence of political motives behind this crisis. It called on the authorities in the concerned ministries to immediately handle the issue and to devise quick solutions that would prevent the return of the garbage crisis and its spread in the areas.

Lebanon is part of the iranian-syrian axis of evil.

and these terrorists were doing what exactly in Syria?

As Eagledawn would say, it’s a cartloads of BS.

I don't think you have a good handle on current events.

I guess I don't and you do. Thanks for setting the record straight...

When nawwaf al moussawi says in the Lebanese parliament that Aoun became president through the rifle of the iranian terror militia, this to the 'Canadian' so called Lebanese is not an indication that Lebanon is part of the Iranian-Syrian axis;)!

lol @ the 'christian' who fought in the civil war with the Kataeeb:)