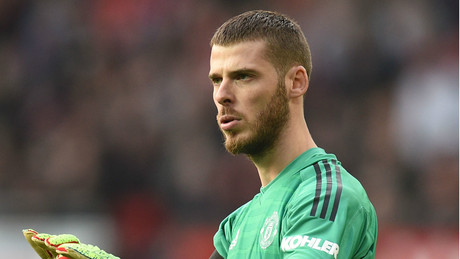 United's pre-season tour of Australia has been overshadowed speculation over the futures of several stars, including De Gea who is in the last year of his contract and has been linked with French champions Paris Saint-Germain.

The Spaniard is reportedly close to signing a new five-year deal with United worth in excess of £350,000 a week that would make him the highest paid goalkeeper in the world.

De Gea was rested from United's pre-season opener against Perth Glory on Saturday but will line up against Leeds on Wednesday to wrap up the Red Devils' 10-day visit to the Western Australia city.

"He'll play and hopefully we can agree (on a new deal) with David, as I've said a few times," Solskjaer told reporters.

"That'll be up to David to announce when that happens, if and when."

The United boss refused to be drawn on whether Leicester City and England centerback Harry Maguire was on his way to Old Trafford.

"There's been loads of speculation but I can't really say anything," Solskjaer said.

"There's a limit of players and whoever performs will be part of the team and whoever doesn't they will have to fight to get back in.”

After an unconvincing 2-0 victory over a depleted Perth, United will be hoping for a better performance against one-time bitter enemy Leeds.

The rivalry has simmered since Leeds' relegation from the English Premier League in 2004 but hostilities between the passionate fan bases are still evident with extra security measures being put in place by organizers at Perth Stadium.

Solskjaer said United were excited to renew the rivalry. "Of course you want to have games against the biggest clubs," he said. "It's a great occasion for both sets of supporters and the players because there were great games (in the past)."

Romelu Lukaku, who is reportedly looking to secure a move to Inter Milan, is set to play his first pre-season match against Leeds after recovering from a "niggle". However, Luke Shaw is likely to miss out after suffering a hamstring injury in the match against Perth.

United will have further pre-season games against Inter Milan in Singapore on July 20 and Tottenham in Shanghai on July 25, while Leeds will head to Sydney to face Western Sydney Wanderers.