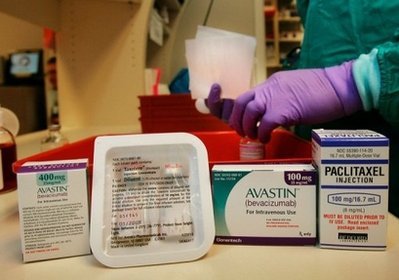 The cancer drug Avastin, also known as bevacizumab, is linked to a higher risk of death when combined with chemotherapy, said a study Tuesday in the Journal of the American Medical Association.

The drug has previously been found to raise the risk of blood clots in the legs and lungs by 33 percent, and in December the U.S. Food and Drug Administration said it was neither safe nor effective against breast cancer.

Bevacizumab, marketed as Avastin by the Swiss drug giant Roche, has been approved for use in combination with chemotherapy for treating colorectal cancer, non-small cell lung cancer and renal cell carcinoma.

After conducting a review and meta-analysis of a total of 10,217 patients with advanced solid tumors studied in 16 different trials, researchers reported the overall incidence of fatal adverse events with bevacizumab was 2.5 percent.

"Compared with chemotherapy alone, the addition of bevacizumab was associated with a 1.5 times increased risk of FAEs," it said.

The height of the risk varied across different treatments, and depended on the type of chemotherapy it was administered alongside, but not the type of tumor or drug dose, the study said.

Hemorrhage, a blood disorder called neutropenia, holes in the gastroinestinal tract, pulmonary embolism and stroke were the most frequent causes of fatal bleeding linked to the drug, the study said.

The study said that since "absolute risk of treatment-related mortality appears low, the use of bevacizumab should be considered in the context of overall survival benefits."

In an accompanying editorial, Daniel Hayes of the University of Michigan Comprehensive Cancer Center said the "jury is still out" on bevacizumab.

"Although bevacizumab has benefit, it is currently not possible to determine in whom or for how long," Hayes wrote.

"Thus, oncologists are forced to dilute the potential effects of bevacizumab by exposing all treated patients, and society, to enormous costs and occasional life-threatening toxic effects. These unfortunate circumstances are sad for those who pay the bills -- and sadder for patients with solid tumors."