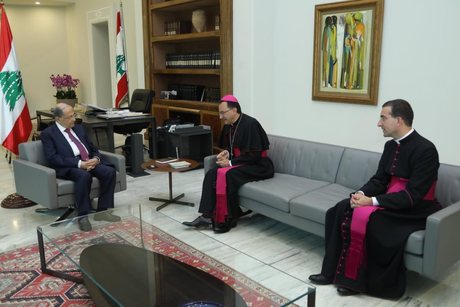 NNA said discussions focused on the general situation in Lebanon in light of the latest developments.

"The Holy See is keen on Lebanon's stability and unity," Spiteri said, praising Lebanon's model of coexistence “that has become a model to follow.”

Spiteri also relayed the Vatican's support for Aoun's initiative to establish in Lebanon the Human Academy for Encounter and Dialogue.

The meeting touched on the economic situation and the general budget discussions currently taking place in Lebanon’s Parliament, along with the preparations related to the Paris Cedre Conference recommendations.

Aoun thanked Santos for "the efforts he exerted during his stay in Lebanon to promote the Lebanese-Vatican relations."

The sooner skeleton takes him the better.