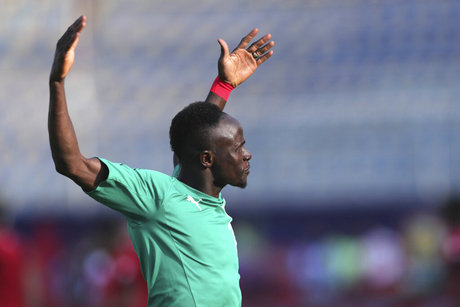 After a Champions League title with Liverpool, Sadio Mane is out to conquer a second continent in as many months as Senegal attempt to capture a first Africa Cup of Nations title against Algeria in Friday's final in Cairo.

A calf injury ruined Mane's 2015 Cup of Nations, while his missed penalty knocked the team out in a quarter-final shootout two years ago, and he has already twice failed from the spot in Egypt.

Mirroring the fortunes of the Teranga Lions, often favorites but never champions, the 27-year-old has sometimes disappointed, although he likely holds the key to Senegal erasing 60 years of hurt in African football.

Coming off his most prolific Premier League season, finishing in a three-way tie for the golden boot with 22 goals, and a European crown in June, Mane is the face of a new, successful generation and deserves recognition in the battle for the revered Ballon d'Or.

As the spearhead of a team that returned to the World Cup in 2018 after a 16-year absence, Mane has guided his side to the Cup of Nations final, the country's second after 2002, with three goals and an assist at this tournament.

"He has something unique, nothing is predictable with him. There is no plan he can be held to. He can make the difference at any moment, with a dribble, a pass or a sudden attack," said Senegal coach Aliou Cisse.

He has made Mane the focal point of a fearsome, yet ever-changing attack amid the shuffling of Ismaila Sarr, Keita Balde and Krepin Diatta around the consistent presence of Mbaye Niang and Mane.

In the absence of the suspended Kalidou Koulibaly, the forward will be forced to assume added responsibilities to get his hands on the trophy, an obsession for Senegal and their coach, who was the captain of the runners-up 17 years ago.

"I'm even ready to swap a Champions League for a Cup of Nations. Going to Dakar with the trophy would be extraordinary. It would be my wildest dream," Mane told France Football ahead of the competition.

Victory in two days' time would put Mane in esteemed company as one of just a handful of players with both Champions League and Cup of Nations honors, joining the likes of Cameroon's Samuel Eto'o, Ivorian pair Salomon Kalou and Yaya Toure, Nigerians Finidi George and John Obi Mikel, Ghana's Abedi Pele and Rabah Madjer of Algeria.

It would also make a compelling argument for Mane's Ballon d'Or prospects, with Liberia's George Weah, in 1995, the only African to have claimed the prestigious prize. In front of him though stand the irrepressible duo of Lionel Messi and Cristiano Ronaldo, as well as club team-mate Alisson, Brazil's Copa America-winning goalkeeper.

"You can't think about the Ballon d'Or. What's important for Sadio is that he continues to fight for the team and delivers performances. He's in that mindset. My talks with him are clear: give everything for the team, and the team will give you it back," said Cisse.

"He's a boy whose head is screwed on right, who understands the team will always come before individuals."