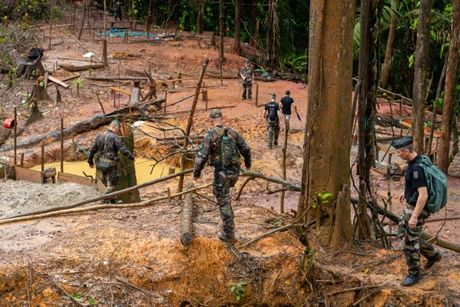 Three soldiers have been killed and another seriously injured in an operation to destroy an illegal gold mine in French Guiana, France's Armed Forces Minister Florence Parly said Thursday.

The soldiers, aged between 27 and 31, were "overcome by toxic fumes at the end of a tunnel" as they prepared to blow up the mine in a forest in the French territory on the northeast coast of South America on Wednesday, she said in a statement.

Five other soldiers who were with them are in hospital, with one in a "serious condition".

The deaths -- which authorities say were accidental -- took place in the isolated forest area of Saint Jean d'Abounami in the Guiana Amazonian Park, home to a growing number of illegal gold mining sites.

Every day, more than 500 soldiers, police and rangers are tasked with patrolling French Guiana's forests as part of Operation Harpie, aimed at driving out the lucrative and highly organised industry.

Last year, authorities carried out 1,300 patrols -- an average of 11 per day -- leading to the discovery of 765 illegal sites and the seizure of equipment and cash worth 26 million euros ($30 million).

An aerial surveillance mission in January identified 132 illegal gold mines, one of the highest numbers in the past decade.

A study by a Brazilian conservation group in December last year warned about a "epidemic" of illegal gold mines in the Amazon which was destroying the forest, polluting rivers with the use of mercury, and threatened the survival of some indigenous communities.

French Guiana, situated between Brazil and Suriname, is home to France's rocket-launch site which is used to carry satellites into space.

I was just thinking that if France means to tweak its foreign policy, it needs to send in troops to secure the perimeter first. How many Legionnaires would it take to bring Lebanon to a stand-still? I mean, to get Lebanon going again? I mean, for the first time?