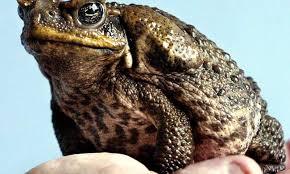 A toxic cane toad prevalent in Australia's tropical north has been captured near Sydney, sparking fears the invasive species could be adapting to cooler weather and spreading southwards, further threatening the country's unique wildlife.

A local family caught the adult male toad about 50 kilometers (30 miles) north of Sydney on Tuesday, the first time one of its kind had been found wild in the area, the Australian Reptile Park said.

The toad has a highly poisonous venom that kills predators that try to eat them, causing catastrophic declines in native wildlife populations in northeast Australia.

Conservationists are concerned that the tough and adaptable pest, introduced from Central America in 1935 to control beetles in sugarcane fields, may be adjusting to the climate in southeast Australia amid an unseasonably mild winter.

"If it's warmer for extended periods of time, it's obviously going to complement the toads," Park manager Tim Faulkner told AFP.

Faulkner said he was aware of just two others being found in the area over the past 15 years -- both of which had "hitched a ride" with travelers or delivery trucks.

"To find one in the middle of winter at a dam croaking... is a concerning sign," he told AFP.

"That's not necessarily to suggest it got here itself, but the circumstances it came in is questionable."

The country has been trying desperately to control the spread of the toxic fast-breeding species -- females can lay up to 70,000 eggs a year.

Faulkner said an even greater range of Australian wildlife could be in peril if toads were able to travel further from their most southerly known habitat, which the government believes is about 400 kilometers north of Sydney.

"One single pair of toads could have a catastrophic effect."