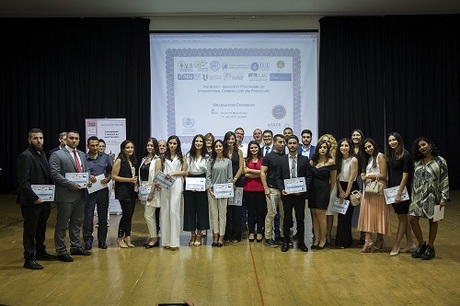 One hundred and seventy-six Lebanese students have successfully completed the seventh edition of the Inter-University Programme on International Criminal Law and Procedure (IUP-ICLP), the Special Tribunal for Lebanon said on Thursday.

The graduation ceremony, marking the completion of the program, was held Wednesday in the auditorium of the Sin el Fil Municipality.

This year’s program began in October 2018 and ended in May 2019, with the final exam taking place in June 2019. The 20 students who obtained the highest grades were awarded a three-day study trip to The Hague. They will visit the international judicial institutions in August this year.

Almost one thousand Lebanese students have graduated from the IUP-ICLP since its establishment in 2011. Alumni of the program now work as lawyers, academics, and in prominent positions in non-governmental organizations in Lebanon. Many have gone on to pursue advanced education in International Criminal Law. Several have succeeded in securing internships and employment at the Special Tribunal for Lebanon (STL) and other international institutions.

Organized by the Special Tribunal for Lebanon in cooperation with T.M.C. Asser Instituut in The Hague, The Netherlands, the International and Transitional Justice Resource Center in Lebanon, and eleven Lebanese universities, the Program gives participants solid legal training in mass atrocity crimes (such as genocide, crimes against humanity, and war crimes), as well as the crimes of aggression and terrorism, from top international experts. It is unique in the Middle East-North Africa region and is one of the Special Tribunal for Lebanon’s main outreach and Legacy projects.