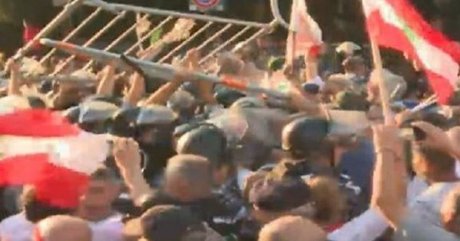 Minor scuffles broke out outside parliament Thursday when protesters tried to advance towards the building during the final session of parliamentary debate on the 2019 state budget.

The scuffles erupted after the protesters – a grouping of retired servicemen – crossed a barrier placed by security forces near An-Nahar newspaper’s building.

The retirees have staged dozens of protests to warn authorities against slashing their salaries and benefits in the new state budget.

Defending the 2019 budget before parliament, Finance Minister Ali Hassan Khalil said that “after a long absence, we are restoring the regularity of the state's accounts.”

“We are before a real state budget,” he said.

“The budget’s numbers do not meet our aspirations at all but we will settle for calling it the best possible budget,” Khalil added.

Prime Minister Saad Hariri meanwhile snapped back at those saying the draft budget lacks an economic vision, saying its economic vision had been outlined in the government's policy statement.

"We have clearly lowered the deficit in the new state budget," Hariri boasted.

"How can we increase revenues without taxes?" he asked, addressing critics.

"We are trying to fight corruption and the waste of public money... There can be no reform process without a cost and everyone must bear this cost and we cannot continue with a bloated public sector," Hariri argued.

Speaker Nabih Berri then adjourned the session to 3:00 pm Friday.

This government will bleed people dry, how else can they pay back the 100 billion dollars they stole over the years?