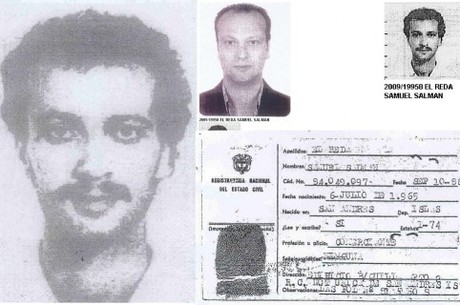 The United States on Friday offered a $7 million reward to find a Hizbullah operative accused of masterminding a deadly 1994 attack on a Jewish center in Buenos Aires, as it vowed to bring together Latin American nations to fight the militant group.

The United States also imposed sanctions on the Hizbullah figure, Salman Raouf Salman, in tandem with Argentina's announcement on the 25th anniversary of the attack that it is designating the Lebanese movement as a terrorist group.

U.S. Secretary of State Mike Pompeo was visiting Argentina to commemorate the attack and lit a candle at the site of the devastated Argentine Israelite Mutual Association, known by its Spanish acronym AMIA.

He was joined by several ministers from Latin American nations who also came to Buenos Aires for talks on counter-terrorism.

"They were killed by members of a terrorist group, Hizbullah, and had help that day from Iran," Pompeo told a remembrance ceremony, saying that Iran's elite Revolutionary Guards provided "logistical support and funding."

"We have not forgotten, and we never will," Pompeo said at the AMIA, where a plaque listed the names of the 85 victims.

AMIA president Ariel Eichbaum said that responsibility for the attack lays with Hizbullah and Iran, the primary sponsor of the Lebanese group.

Eichbaum asked all countries to "help us find those responsible and bring them to justice."

After 25 years, no one has been brought to trial and the case has been bogged down in Argentina amid allegations of political interference and high-level corruption.

Iran and Hizbullah both deny responsibility for the attack, and persistent skeptics have questioned the motivation. Hizbullah was also accused of carrying out a deadly attack two years earlier against the Israeli embassy.

The United States has encouraged Latin American countries to follow its lead in aggressively designating groups or individuals as terrorists, as witnessed through Argentina's action.

"In the face of a global threat like Hizbullah, it is every sovereign nation's obligation and responsibility to comply with sanctions designed to keep all of us safe," Pompeo said as he opened the talks with fellow ministers.

"Solidarity is the antidote to the terror threat," he said.

The State Department said the $7 million reward would go to anyone who provides information that leads to the location of Salman, also known as Salman al-Reda.

The Treasury Department said Salman masterminded the 1994 attack and "has directed terrorist operations in the Western Hemisphere for Hizbullah ever since."

Salman has been reported to have joint Lebanese and Colombian citizenship, allowing him to move more easily across Latin America.

The Treasury Department said that Salman also served as a handler for a man arrested by Peru in 2014 for allegedly planning to attack Israelis and Jews.

Asked where Salman is believed to be now, a senior U.S. official said: "We think he is probably somewhere in the Middle East."

The Treasury designation will freeze any assets Salman may have in the United States and criminalize any assistance to him, although Hizbullah as a whole is already under heavy U.S. sanctions.

The actions come amid high tensions between the United States and Iran after President Donald Trump left a denuclearization accord and slapped sweeping sanctions on Tehran.

Pompeo on a visit in March to Beirut vowed to stop "all malign behavior" by Iran including activities by Hizbullah.

But Lebanese officials defended the group, which has emerged into a major political party with cabinet ministers and which won popular support through its military operations against the Israeli occupation of southern Lebanon.

The United States should sanction blablablablablabla for luring unsuspecting and naive young men into penetrating his deep and wide luv tunnel and depositing their lubricants inside it for the purpose of financing terrorism.

He probably has a top level position in the terror group now, like all the "early birds" have/had.

He was canonized years ago and became a saint with honors.