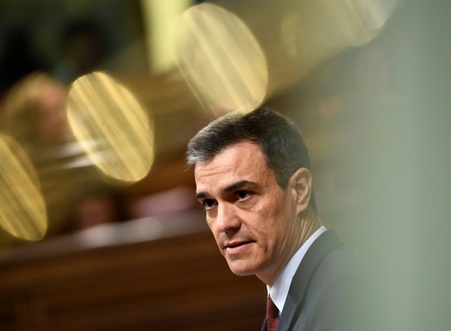 Sanchez, currently caretaker premier after an inconclusive election in April, has two chances this week to get his programme approved by parliament.

In a first vote due on Tuesday, Sanchez will need at least 176 votes -- an absolute majority -- to be able to return to government. Most observers think he has little chance of getting that.

In a second vote on Thursday, a simple majority will do. And there, the consensus is that he has a fighting chance.

On Monday, Sanchez pledged in his address to parliament to reduce Spain's public debt to 95.8 percent of gross domestic product this year, down slightly from previous forecasts.

That could signal to financial markets that the coalition he hopes to form with the radical leftwing Podemos party could follow a strict budget policy.

Spain's increasingly fragmented political landscape makes it harder for a single party to win a majority in parliament.

And Sanchez has to negotiate his way into power because although his party was victorious in the election, it won 123 seats in the 350-seat parliament -- short of a ruling majority.

He is currently wooing Podemos and several small regional parties.

After nearly three months of talks, there were signs of progress on Friday when Podemos leader Pablo Iglesias agreed not to take a government post: one of the sticking points in the negotiations.

That could be enough to help break the deadlock and given post-Franco Spain its first government in which a radical left party forms part of a ruling coalition and occupies ministerial posts.

On Monday, as the socialists set out their programme, there was no word that an electoral deal with Podemos had been concluded.

"The opacity of the talks is all part of the show, this kind of soap opera they are trying to distract us with," Juan Carlos Girauta, spokesman for the liberal Ciudadanos party, said in a television interview.

"Everyone already knows how it will turn out," he added. Although his party opposes another Sanchez government, it expects him to win Thursday's vote.

As well as Ciudadanos, the rightwing Popular Party and the far-right Vox are also lined up against Sanchez. They accuse him of wanting to cut a deal with the Catalan separatists.

It was the Catalan separatists who helped the socialists into power in June 2018 when they brought down the last Popular Party government with a no-confidence vote.

But they also forced the early elections in April when they refused to back the Socialists' budget.

This time around Gabriel Rufian, leader of the Republican Left of Catalonia, has said his party will not stand in Sanchez's way.

If Sanchez cannot secure the votes he needs this week, he has another two months to find a solution, failing which the Spanish will face another general election.