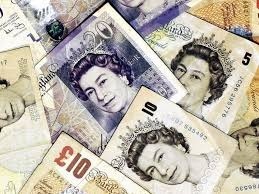 The pound erased its morning losses Tuesday after arch-Brexiteer Boris Johnson won the race to become Britain's next prime minister.

Johnson, who has vowed to take Britain out of the European Union on the October 31 deadline with or without a deal, as forecast beat rival Jeremy Hunt in the battle to become Conservative Party leader.

Ahead of the news, sterling dipped as low as $1.2418 on fears of a dreaded "no-deal" split that severs trade ties abruptly. That was not too far from last week's two-year low of $1.2382.

The European single currency meanwhile rose to just over 90 pence. That compared with last week's peak of 90.51, which had been the euro's highest level since mid-January.

But the pound then recovered its losses for the day to make gains against the dollar and euro.

"Given that he's been the frontrunner for quite some time the immediate market reaction has been fairly quiet with the pound remaining under pressure and not far from its lowest level since April 2017 against the US dollar," noted David Cheetham, chief market analyst at XTB online brokerage.

"The fate of the new PM’s tenure and of the pound for the coming months will be almost solely determined by Brexit developments but in the coming days it would not be too surprising to see some sort of relief rally now that the news is out," he added.

"The question now is whether the pound can recover from its slump in the near-term or whether the risk of no-deal is just too great and every passing week is seen to take us one week closer to the cliff-edge," said analyst Craig Erlam at currency trading brokerage OANDA.

While the EU signaled it wanted to work constructively with Johnson, it has indicated that the deal negotiated by outgoing prime minister Theresa May and which British lawmakers have refused to approve, isn't open to renegotiation.

In morning trading the weak pound had handed a boost to the London stock market, because it makes exports cheaper for buyers using stronger currencies, and the gains held into the afternoon.

Elsewhere, Asian stock markets rose Tuesday, tracking gains on Wall Street with confidence given a boost by a positive earnings season and speculation that top US and Chinese negotiators will hold face-to-face trade talks soon.

A bipartisan agreement to raise the US debt ceiling to fund the government for another two years -- avoiding another painful shutdown -- also provided some support.

The gains across the board come a week before the Federal Reserve holds its next policy meeting at which it is expected to cut interest rates, with a big question over how deep it will go.

Oil prices dipped up as traders keep tabs on the rumbling Iran crisis after it seized a UK-flagged tanker in the Gulf on Friday.