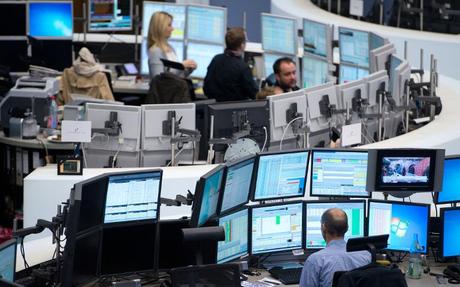 Sterling gained versus the euro and dollar as traders readied for Johnson -- a leading Leave campaigner in Britain's shock Brexit referendum three years ago -- to take the reins from outgoing premier Theresa May.

He will be appointed later Wednesday by Queen Elizabeth II at Buckingham Palace.

Sterling had already rallied Tuesday in reaction to Johnson's election as Conservative Party leader, with investors keen to see whether he pushes ahead with a no-deal divorce from the European Union at the end of October.

"The pound is beginning to stabilise, proving that a lot of the scepticism about Boris Johnson's Brexit policy was already built into the price," said City Index analyst Fiona Cincotta.

"Sterling is trading a touch higher this morning," she noted.

May resigned after failing to get parliamentary support for a Brexit deal she had struck with EU leaders.

Heading towards midday, London's FTSE 100 was sharply down by 0.9 percent.

"The FTSE 100 is firmly in the red as mining stocks are weighing on the index," said CMC Markets analyst David Madden.

"A sell-off in iron ore prices in China has prompted a decline in major mining stocks like Rio Tinto, BHP Billiton, and Glencore.

Most Asian markets enjoyed another day of gains, with support coming from more healthy earnings results and renewed hopes for a resolution of the China-US trade war.

Adding to the upbeat mood were reports that US President Donald Trump's Trade Representative Robert Lighthizer will lead a delegation to China next week to resume trade talks.

The meeting would be the first head-to-head talks since negotiations were cut short in May by Trump's surprise decision to hit China with more tariffs for what he called Beijing's backsliding.