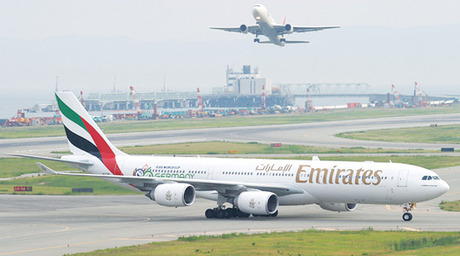 Dubai's Emirates Airlines said on Wednesday it launched service to Basra in southern Iraq, its first destination in the war-torn country.

"Emirates has marked its 110th international destination today with its inaugural flight to Basra, the airline's first service into Iraq," a statement said.

"Iraq is experiencing a surge in growth and it is our goal to help the country prosper and flourish. The potential for this destination is significant and Emirates is committed to working alongside the Iraqi authorities to make Basra a success," President Tim Clark said in the statement.

"Iraq is a key destination for Emirates and we expect our operations to Basra to thrive alongside the city’s growth," Clark said.

Emirates will operate Airbus A330 flights to and from Basra on Mondays, Wednesdays, Thursdays and Saturdays, the airline said.

It will also provide cargo services, estimating that 130 tons of freight would travel between Dubai and Basra each week.

Expected cargo includes equipment for oil companies and a "diverse range" of other goods, it added.

Emirates said in May that it planned to launch thrice-weekly service to Baghdad in July, but has yet to do so.