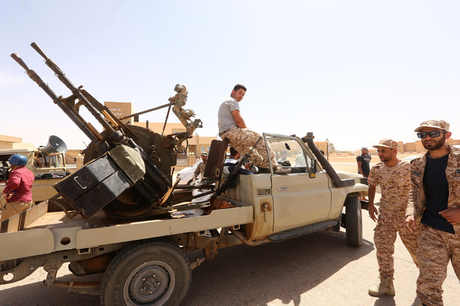 "Our air force carried out several raids against the Misrata airbase, targeting anti-air defences as well as a Turkish aircraft transporting ammunition, drones and missiles," Haftar's self-styled Libyan National Army said in a statement on its Facebook page.

Pro-Haftar television channel Libya Al-Hadath said a Turkish Ilyushin aircraft "was destroyed as it landed at the Misrata base".

It aired footage, which could not be independently verified, of the alleged strikes.

Forces loyal to the UN-recognised Government of National Accord (GNA) did not immediately confirm or deny the reported attack.

Haftar forces launched an offensive in April to wrest Tripoli from the GNA.

Many of the government's best equipped and most seasoned fighters come from Misrata, which is east of the Libyan capital.

Turkey and Qatar have been the main supporters of the GNA government, while Egypt, Saudi Arabia and the United Arab Emirates have backed Haftar.

Tuesday's air strikes came a day after the GNA and a local official reported the death of at least 42 people in a raid targeting a town hall meeting in southern Libya.

Dozens more were wounded in Sunday night's attack which the GNA said was carried out by Haftar forces.

UN envoy Ghassan Salame has repeatedly denounced an escalation of violence between the two camps and called for negotiations.

Last week he proposed a ceasefire for the Muslim holiday of Eid al-Adha due to start on August 10.

The World Health Organization says the battle for Tripoli has left nearly 1,100 people dead and wounded more than 5,750, while forcing more than 100,000 civilians to flee their homes.