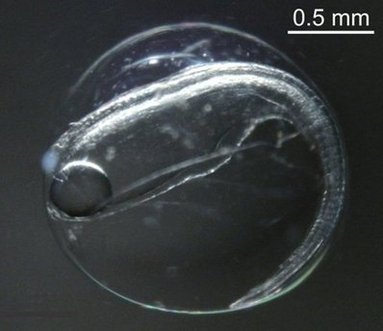 Japanese researchers have collected eel eggs from the wild for the first time ever, shedding light on the mystery surrounding the spawning habits of the fish.

Experts say the new discoveries about how and where eels lay their eggs could help pave the way for new techniques to farm a creature that Greek philosopher Aristotle believed emerged spontaneously from mud.

The team of researchers told British science magazine Nature Communications, published on Tuesday, that they had found 31 eggs near the West Mariana Ridge in the Pacific Ocean near Guam in May 2009.

Institute and the Fisheries Research Agency.

"Further research into the physical and biological surroundings in the area where the eggs were collected will contribute to eel production by telling us more about the environment and food information for farming eels," said Hideki Tanaka, a researcher at the agency who participated in the project.

Most eels used for food are raised in farms using fry -- or very young eels -- caught at sea. But eel fry numbers have fallen substantially from their peak in the 1970s due to overfishing and climate change.

The Fisheries Research Agency last year succeeded in farming eels from eggs but the technology is not yet considered commercially viable, as the number of eggs that successfully hatch is low.

The team believes the latest collection of eggs will be bring about a breakthrough in developing eel farming technology and facilitate conservation efforts, it said.