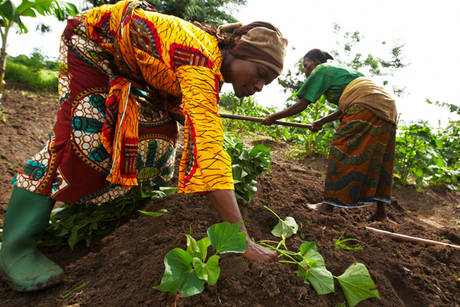 Women farmers face the brunt of the threat posed by climate change, yet they may hold the key to helping limit its fallout, according to a landmark UN report to be released this week.

Although they make up more than half the agricultural labor force in developing nations, according to the Food and Agriculture Organization (FAO), women farmers are far less likely than men to own the land they till.

This makes it difficult for them to invest in sustainable practices that would enhance yields while protecting Nature.

Scientists and policymakers from around the world are gathered in Geneva to finalise the most detailed scientific assessment yet of the impact that industrial agriculture, deforestation, and food waste have on our planet.

The Intergovernmental Panel on Climate Change's report is expected to lay out the stark trade offs facing a world struggling to feed 10 billion people by 2050 while avoiding catastrophic global warming.

A draft summary of the vast assessment said that empowering women would bring "co-benefits to household food security and sustainable land management."

Hindou Oumarou Ibrahim, coordinator of the Indigenous Women and Peoples Association of Chad, works with women farmers in the landlocked African nation.

"There's a lack of recognition of land rights to women both officially and traditionally -- men normally have land and they distribute it to the boys, not the girls," she told AFP.

"Most of the time women farmers are the ones feeding the communities whereas the men are selling and doing it for their businesses."

The IPCC report is expected to address the need to boost nutrition in poorer nations while slashing food waste and loss, which are a major contributor of greenhouse gas emissions.

The FAO says closing the gender gap in agriculture could increase yields on women's farms by 20–30 percent, potentially reducing the number of hungry people in the world by close to a fifth.

Teresa Anderson, climate policy coordinator for ActionAid, said governments had for too long seen agriculture as a male-only sector.

"Policymakers often assume that man is the default human, or the default farmer," she said.

"But women farmers do things differently and face specific challenges in agriculture precisely because they are women."

In developing nations, women farmers are often also tasked with raising families, lack access to male-dominated trading markets, and have little protection against extortion or theft.

They are also uniquely vulnerable to  drought, flash-floods and land degradation made worse by climate change.

In Chad, Ibrahim encouraged women farmers to form cooperatives to close the power imbalance with their male peers.

"This way they have better voices among the community and better production. It helped them to generate more revenue, and that's empowered them in terms of the decisions they can take."

She also worked with women, many of whom were innumerate, on an accounting system based on weights and bars, allowing them to carry out more precise stock-takes -- vital when the rainy season comes.

Ibrahim wants to see land tenure laws brought into the 21st Century, allowing women to club together and buy the land they work, increasing their ability to plan long-term and think sustainably.

"This is important not only to communities but also to industry, as small farms feed million of people," she said.

"We need transformational change in the food sector, and women have a key role in co-parenting and providing education in the long-term effect in diet and a shift in consumption patterns," she told AFP.