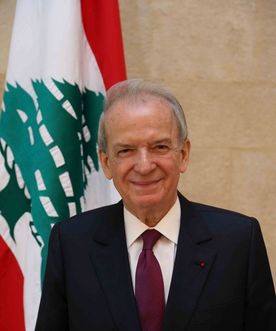 Progressive Socialist Party MP Marwan Hamadeh said on Wednesday that the presidential term of President Michel Aoun “takes Lebanon back to the time of the Syrian hegemony," the Saudi Asharq al-Awsat daily reported on Wednesday.

Hamadeh said it was “unfortunate how the (presidential) term has placed Lebanon on the brink of political and economic bankruptcy. This term takes us back to the Syrian hegemony over Lebanon,” he said in an interview with the daily.

Hamadeh said there was “coordination” between Syria, the Free Patriotic Movement and Hizbullah in order to implement Hizbullah’s agenda in Lebanon.

“There is a line that runs between al-Muhajireen Palace (in Damascus), to Mirna al-Shalouhi (FPM headquarters) to Haret Hreik (Hizbullah’s bastion) where everyone abides by Hizbullah’s agenda,” said Hamadeh.

Lebanon is part of Syria, and so is Palestine. You can get to the same goal by another route, using as many national states as you want: majority rule with minority rights. I doubt you'd find anything as bad in Syrian government formation or practice as obviously wrong as Lebanon's Article 24 which reserves half of the legislature for so-called Christians or Israel's Basic Laws which define Israel as a "Jewish and democratic state". Besides, Syria is always under attack, which allows, requires, the establishment of martial, i.e., emergency, law. All Lebanon has to do is take out its pen and cancel the reverse-power-sharing which places "Christians" on a higher tier than others, just like Israel's Jewish supremacy form of failed-statehood.