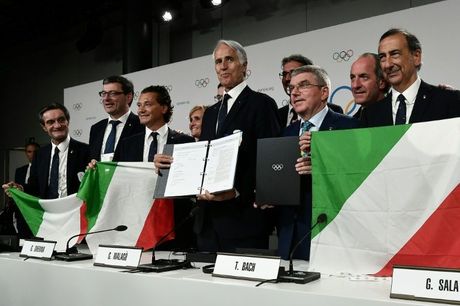 The letter, which was addressed to CONI president Giovanni Malago and has been seen by AFP, said the legislation  "would clearly affect the autonomy of CONI."

The letter, disclosed Tuesday in the Corriere de la Serra newspaper, recalled the fundamental principles of Olympism whereby membership of the Olympic movement "requires compliance with the Olympic Charter and recognition by the IOC."

James Macleod, director of Olympic Solidarity and NOC Relations, who signed the letter, said the new legislation would not conform to the Olympic charter.

He suggested amendments to the draft decree and emphasized that CONI should not, as the draft law proposes, be reorganized by "unilateral decision from the government."

"CONI should be an autonomous and legally independent organization governed primarily by the Olympic Charter and its own statutes, within the framework of the applicable laws under which it is legally registered in the country," he said.

Contacted by AFP, a CONI official said the situation was "complicated" after Italy's parliament adopted framework legislation late Tuesday following the publication of the letter.

The legislation authorizes the government to bring in reforms to the organisation of Olympic sport. But lawmakers insisted that the independence of CONI would be respected.

"We succeeded in passing a non-binding resolution which authorizes the government to exercise its prerogatives while respecting the Olympic Charter," Senator Claudio Barbora was quoted as saying by the Italian media.

"In the process we will clarify all misunderstandings as shown in the letter from the IOC official," he added.

Just a year ahead of the Tokyo Olympics, the IOC letter warned that the IOC chiefs had the power to suspend or withdraw recognition of a national Olympic committee (NOC) "if the constitution, law or other regulations in force in the country concerned, or any act by any governmental or other body causes the activity of the NOC or the making or expression of its will to be hampered."

The IOC is proposing a meeting this week in Lausanne with CONI to "help resolve the issue."

The warning also comes less than two months after the Milan-Cortina d'Ampezzo won the bid to host the 2026 Olympic Winter Games.

In 2015, in a case of government interference, the IOC suspended the National Olympic Committee of Kuwait. Its athletes participated under a neutral flag at the 2016 Rio Games. The suspension was lifted last month.