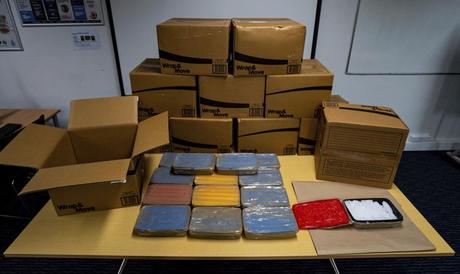 New Zealand police said Friday they had arrested two British men after finding a huge stash of methamphetamine in an Auckland apartment that would have been worth tens of millions of dollars if sold on the street.

Police said they've been targeting a foreign criminal organization working in New Zealand as part of what they're calling Operation Essex. They say the bust was one of the largest of its type in New Zealand.

Police said they searched the apartment last week and found plastic storage containers inside cardboard packing boxes that were filled with more than 200 kilograms (441 pounds) of meth with a street value of 144 million New Zealand dollars ($93 million).

In part due to New Zealand's isolated location, drugs like methamphetamine tend to bring a higher price here than in many other parts of the world.

Detective Inspector Paul Newman told reporters they arrested a 60-year-old man at the apartment and a 49-year-old man at Auckland Airport. Both men remain in jail and have been charged with possessing methamphetamine with intent to supply.

"We're making inquiries with police liaison officers overseas and hopefully tapping into our law enforcement partners overseas to try and work out the threat that this syndicate poses to New Zealand," Newman said.

And in an unrelated drug find, police said Friday they believe that packages of cocaine that washed up on an Auckland beach this week likely drifted for a year and over hundreds of kilometers (miles) across the Tasman Sea from Australia.

Detective Inspector Colin Parmenter said that in August 2018, Australian authorities intercepted an inflatable boat off the northern coast of New South Wales. He said two people who were arrested at the time were seen dumping packages of cocaine into the ocean.

Parmenter said most of the cocaine had since been recovered. He said that the drugs that washed up in New Zealand matched the markings and packaging of the Australian drugs. The cocaine found on the beach had a street value of about NZ$3 million, he said.