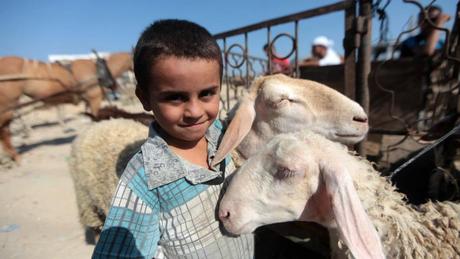 The financial crisis in the Palestinian territories is causing hard times for residents but may lead to an unexpected reprieve for many sheep.

Ahead of Eid al-Adha, the feast of the sacrifice, better-off Palestinians, like Muslims across the globe, traditionally buy whole sheep to be slaughtered when the holidays begin on Sunday.

But this year the financial crisis has hit sales, farmers and officials say.

Government employees have for months had to survive on half salaries due to a political dispute between the Israeli and Palestinian governments.

"There are no orders for sacrifices as usual," Ashraf Murar, head of the large Al-Bireh abattoir in the central West Bank, told AFP.

Butcher Mohammed Faara said his sales were down 70 percent on last year.

"The situation is very miserable, I have contacts with other butchers and all (have this)."

At a market in Nablus in the northern West Bank, sheep trader Essam Adbullah said prices had been reduced from nearly $10 dollars a kilo last year to around $8 in a bid to boost sales.

"But nobody's buying," he said.

"This year there's a major recession. Due to the (lack of) salaries for government employees, there is no money in the markets."

Gross domestic product barely grew across the Palestinian territories in 2018, while unemployment is running at 30 percent, according to the World Bank.

This year's figure may be worse after the cash-strapped government cut civil servant salaries to between 50 and 60 percent because of the crisis.

Israel collects around $190 million a month in customs duties levied on goods destined for Palestinian markets that transit through its ports, and then it transfers the money to the Palestinian government.

In February, it began withholding around $10 million a month it said corresponded to the amount the Palestinian government paid to families of prisoners in Israeli jails or prisoners themselves.

It says such payments encourage attacks on Israelis.

Palestinians, for their part, view prisoners as fighting against Israeli occupation and say the funds support families who lost their main breadwinner.

Palestinian President Mahmoud Abbas has since refused to take any of the money, accusing Israel of blackmail, and cut salaries to keep the government afloat.

The crisis has given rise to a kind of a gallows humor among Palestinians, who have been posting videos of sheep running free or relaxing on swings.

Traditionally, Palestinians give family members money on Eid but some are jesting they will have to make do with just a handshake this year.

"a political dispute between the Israeli and Palestinian governments."
There is no such thing. It is simply a political move by the Palestinians refusing to accept monies collected for them by the Israelis.