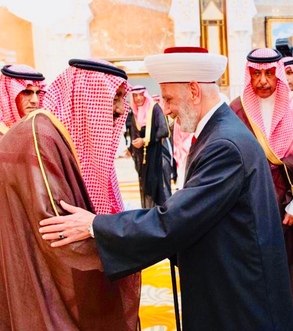 Grand Sunni Mufti of the Republic Sheikh Abdel Latif Deryan met on Tuesday with King Salman bin Abdel Aziz during a ceremony held at the Royal Court at the Mina Palace for senior officials who performed Hajj this year, the National News Agency said.

The Mufti praised the efforts exerted by the Saudi government for the success of the pilgrimage's season.

On the other hand, Deryan said that "Lebanon is witnessing a political and economic breakthrough after the meeting of the Council of Ministers three days ago."

The Mufti also called on Lebanese citizens to rally around state institutions to strengthen its work in implementing economic and development projects and fighting corruption.

These 5 star trips at the Hajj don’t make sense... sitting in a luxury suite overlooking the Kaaba is in my humble opinion a waste of time. It’s like experiencing the Way of the Cross with a cross made of balsa wood and with wheels attached to it.