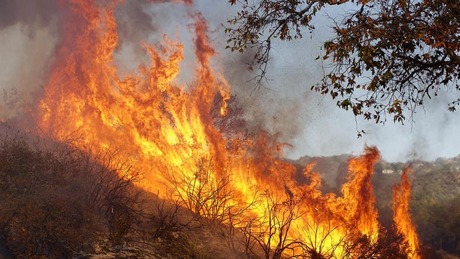 More than 500 firefighters have been deployed to battle a blaze that has already destroyed 900 hectares of pine forest in southern France, the fire service said on Thursday.

The fire broke out on Wednesday afternoon in Aude, southeast of the city of Carcassonne, in forests that were classified as having a "severe" risk of fire because of a recent drought.

The fire was fanned by overnight winds blowing gusts of 40 kmh (25 mph) but homes were not under threat, he said.

No buildings have been destroyed or people injured, he added, but warned that the wind strength was forecast to strengthen during the day.

Firefighters were working to stop the blaze reaching nearby villages.

"The fire if complicated because it is in an area difficult to access," an Aude official said.

The fire service said it planned to drop water bombs over the burning area, after dampening down the edges of the forest overnight.