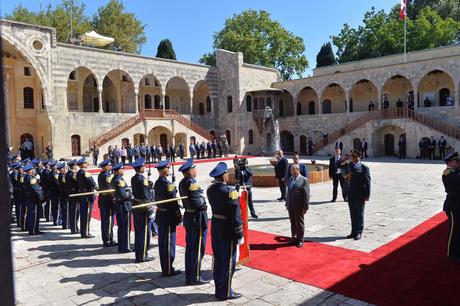 President Michel Aoun moved to the summer presidential residence in Beiteddine in the Chouf area on Friday where a delegation of the Progressive Socialist Party is expected to visit him as a welcome gesture, the National News Agency reported.

Banners welcoming the President stretched from the Damour area to Beiteddine Palace, it added.

But overnight, unknown assailants tore down some of the banners.

In a tweet Friday, Jumblat welcomed Aoun saying: “Above all else, the (Chouf) Mountain welcomes President of the Republic General Michel Aoun at the summer presidential residence in Beiteddine.”

What a fantastic news...what a newsworthy piece of information.

I wonder how much this move cost the treasury and what is the strategic benefit?

A7san dawa sham el hawa... not sure his diseases have a cure though.

Its simply a move of power to show the nation that he the president can go into an area without fear. He probably turned his short stature right around and left after the band played.