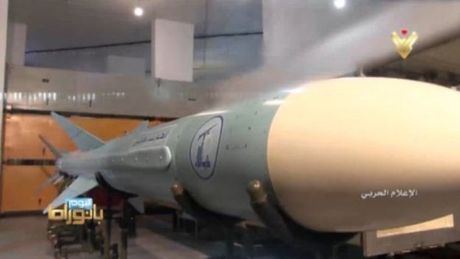 Hizbullah on Friday released footage of what it says are anti-ship missiles of the kind it used 13 years ago against Israel.

Israel has fought several conflicts against the Iran-backed Hizbullah, the last in 2006.

More than 1,200 Lebanese, mostly civilians, and more than 160 Israelis, the majority soldiers, died during the last conflict but many in Israel consider the war a failure as Hizbullah was not defeated.

Since 2006, Israeli officials have repeatedly warned that the Lebanese group maintains an arsenal of several hundred long-range missiles that could be used to target Israel.

On Thursday night, a series of videos on Hizbullah-run media purported to show at least five anti-ship missiles stored inside metallic containers in an unknown location.

Hizbullah's logo could be seen printed on the warheads.

It was not clear when the footage was filmed.

A Hizbullah naval commander, identified as Haj Jalal, told Hizbullah's Al-Manar TV on Thursday that the anti-ship missiles are of the same kind used in a 2006 attack on one of the Israeli navy’s top warships, the INS Hanit.

The warship was struck off the coast of Beirut in July 2006, killing four soldiers and causing extensive damage to the corvette.

It was the first direct strike on an Israeli warship in decades and Hizbullah celebrated it as among its biggest victories of the 34-day war.

An investigation found that the missile hit because officials did not believe Hizbullah had such sophisticated technology and so didn't turn on anti-missile systems.

On Thursday, Hizbullah released what it said are videos of the 2006 missile attack.

It also purported to show a truck-mounted launcher firing two anti-ship missiles, that were filmed streaking through the night sky.

Shortly after, the video shows a distant blaze.

In the years since the 2006 war, the discovery of offshore gas fields in Israeli waters has prompted investment in new warships to protect non-moving gas platforms.

Haj Jalal on Thursday told Al-Manar that an anti-ship arsenal is significant to Hizbullah because the "sea serves as an economic lung for the Zionist enemy."

He mentioned "offshore gas fields, some of which are still being explored."

"A threat at sea is a threat to Israel's national security," said Haj Jalal, whose face was blurred during the interview, a common security measure by the group.

On Friday, Hezbollah chief Sayyed Hassan Nasrallah said that the 2006 war has helped Hizbullah develop "a military system to defend our villages, towns and cities."

"If (Israel) enters southern Lebanon... you will see a live broadcast of the destruction of Israeli brigades," he warned.

We must thank the Lebanese Army for doing its job and controlling the borders and not allowing the flow of weapons to this terror organization.