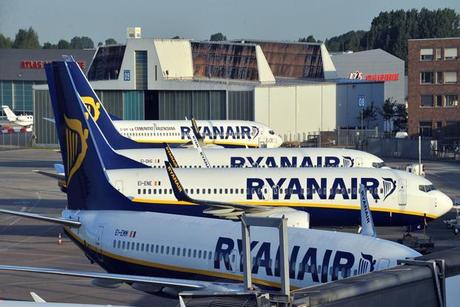 Ryanair flew an almost full service on Thursday, the Irish no-frills airline said despite strikes by pilots and cabin crew based in Britain and Portugal triggered by pay disputes.

"All first wave flights to and from UK airports departed as scheduled this morning, with 97 percent punctuality," Ryanair said in a statement, adding that the minimal disruption was due to air traffic control delays.

"We do not expect any disruptions to our flights to/from our UK airports today," it added.

Meanwhile in Portugal, the only delay was to a flight from Porto to Milan, which was put back until the afternoon.

Pilots in Britain were striking Thursday and Friday, while cabin crew in Portugal were on their second day of a five-day walkout.

However the High Court in Dublin has prevented Ireland-based pilots from joining the walkout.

In Portugal, disruption has been limited after the country's government ordered workers to deliver at least a minimum service.

Ryanair cabin crew in Spain have called for ten days of strikes in September.

The minimal fallout from the strikes contrasts to last year when pan-European stoppages affected thousands of passengers -- and led to Ryanair offering improved pay to staff via landmark deals with unions.

But Irish union Forsa claims its 2018 agreement was limited to matters of the time only.

Ryanair claims Forsa has not outlined specific pay demands, has been hasty in their movement to strike and conducted the strike ballot improperly.

The strikes come as the Dublin-based carrier faces several headwinds that are cutting into its growth and profits.

Ryanair's first-quarter net profits sank by more than one-fifth on rising costs, intense competition and Brexit turmoil -- issues that continue to affect the budget airline that flies mainly throughout Europe.

Against this backdrop, Ryanair recently slashed its growth outlook and is temporarily shutting bases, also as crisis-hit Boeing pushes back plane delivery owing to fatal crashes that grounded its 737 MAX jets.