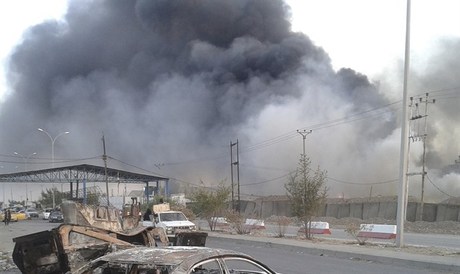 Israel has carried out at least one strike against a weapons depot in Iraq, The New York Times reported Thursday.

There have been a series of blasts in Iraq over the past month at training camps and arms depots used by the Hashed al-Shaabi paramilitary forces, which are mainly composed of pro-Iranian militias.

Israel has repeatedly bombed Iranian targets in neighboring Syria, but an expansion of the campaign to Iraq -- where the Jewish state struck the Osirak nuclear reactor in 1981 -- would risk damaging Washington's relations with Baghdad.

The Hashed's deputy commander Abu Mehdi al-Muhandis, whose virulent anti-Americanism as a militia leader earned him a U.S. terror blacklisting, has been unequivocal in blaming Washington for the blasts.

But Faleh al-Fayyadh, the official head of the Hashed, has walked back the accusations, saying investigations were ongoing.

"Preliminary investigations" found the incidents were "an external, premeditated act," he said.

"The investigations will continue until the responsible entities are accurately identified to be able to take the appropriate stances."

Well Done and thank you!

They’re terrorists. They should be destroyed .