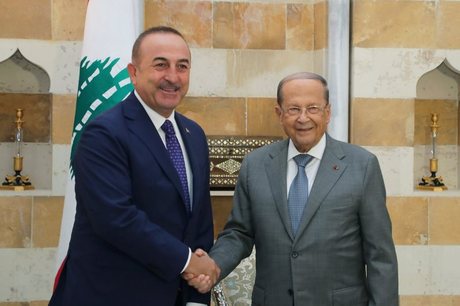 The National News Agency said Aoun told Cavusoglu that "the international community's continued disregard for the need to repatriate Syrian refugees to their country raises several question marks about the reasons."

"Those who have returned from Lebanon to Syria under the supervision of the Lebanese General Security were not subjected to any harassment and the repatriation operations will take place regularly," Aoun added.

Cavusoglu for his part stressed the importance that Turkish President Recep Tayyip Erdogan pins on the Lebanese-Turkish relations and his "appreciation of the role of the President (Aoun) in addressing the events and the developments in the region."

He also emphasized "the importance of Lebanon's role in preserving regional security and stability."

Cavusoglu held talks later in the day with Speaker Berri.

"The visit was an occasion to discuss the general situations in the region, starting by Palestine and the need to hold onto the legitimate rights of the Palestinian people to the importance of finding a political solution in Syria that would preserve its unity and sovereignty," the National News Agency said.

Al-Liwaa newspaper reported Thursday that the minister’s talks will touch on “the developments in the Syrian region of Idlib,” where regime forces are pressing an assault on the last rebel and jihadist bastion in the country.