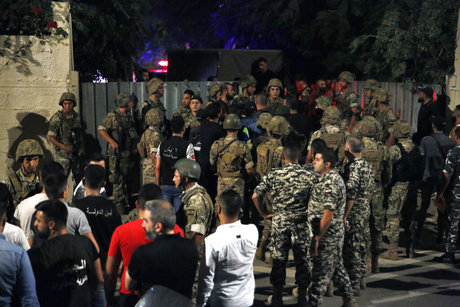 Foreign Minister Jebran Bassil on Sunday asked Lebanon’s ambassador to the U.N. to file an urgent complaint against Israel with the U.N. Security Council over its “dangerous violation of Lebanese sovereignty,” in connection with the overnight drone blast in a Hizbullah stronghold in Beirut’s southern suburbs.

Stressing Lebanon’s keenness on the implementation of U.N. Security Council Resolution 1701, which ended the 2006 war between Israel and Hizbullah, Bassil said Israel is meanwhile “committing daily and repeated violations that terrorize the Lebanese and threaten their safety.”

“Lebanon’s keenness on abiding by U.N. resolutions and its commitment to stability do not negate its right to defend national sovereignty and carry out what is necessary to preserve it,” the minister added in a statement released by the Foreign Ministry.

State Commissioner to the Military Court Judge Peter Germanos meanwhile inspected the scene of the drone blast in the Beirut southern suburb of Mouawad.

“Investigations into this incident differ from crimes that usually occur on the ground and the army is carrying out this mission,” Germanos said at the blast scene.

“I have nothing to do with the (official) Lebanese stance, but we have not noticed that the Israeli enemy has stopped operating inside Lebanon and this is a chapter of the acts that it usually carries out,” the judge added.

Asked whether Lebanese authorities will inspect the intact first drone that crashed in Mouawad, Germanos said: “We are the state and we are the ones who will examine everything.”

because he is a filthy aouni.

Exactly what will happen when the inspection discovers that it is an Iranian drone and not an Israeli one. I bet that Germanos will not publish those results.